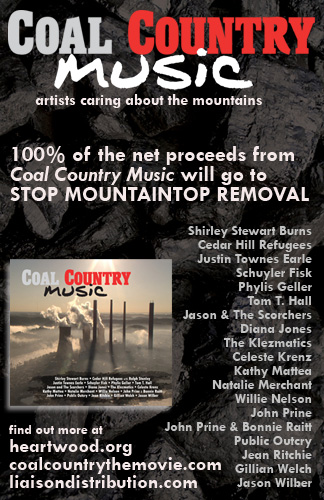 On November 10th, Heartwood, a member of The Alliance For Appalachia, released ‘Coal Country Music,’ the companion CD to the documentary ‘Coal Country’ slated for concurrent national broadcast and DVD release.

With all tracks donated by a stellar cast of renowned musicians, ‘Coal Country Music’ is dedicated to ending the practice of mountaintop removal coal mining exposed in ‘Coal Country’ — net proceeds from the release will benefit the Alliance for Appalachia.

‘Coal Country Music’ is a poignant collection of songs inspired by the central role the Appalachian Mountains have played in American music, history, and culture. From the brilliantly raw and never before released recording of Willie Nelson performing Bob Dylan’s “Blowin’ In the Wind” to Diana Jones’ heart rending “Appalachia,” John Prine’s classic “Paradise,” and Natalie Merchant’s “Which Side Are You On” the songs tell of the struggle for survival in Coal Country.

An exposé on mountaintop removal coal mining and the personal stories of those it affects, the documentary ‘Coal Country’ will also see national release as a DVD on November 10th, and will premiere on the Discovery Networks’ Planet Green channel on November 14th in the new film series REEL IMPACT.

Spanning a cross-section of uniquely American musical styles, and startlingly topical, the album’s music marks the perfect complement, with songs chronicling the passions and sorrows common to the real life characters and communities so powerfully portrayed in the film.

The Appalachian Mountains have played a central role in this nation’s history, cultural heritage and musical traditions. There is not a musician on this compilation whose music does not owe a substantial debt to those traditions, which debt they freely acknowledge, and hope in some small measure to repay with this album, dedicated as it is to protecting those mountains and preserving those cultural traditions.
– Bob Santelli, Executive Directory, Grammy Museum

This entry was posted on Friday, November 20th, 2009 at 7:25 pm and is filed under News. You can follow any responses to this entry through the RSS 2.0 feed. You can skip to the end and leave a response. Pinging is currently not allowed.