With regional coal production in a long-term decline, we’ll be seeing a lot more of this in the upcoming months and years.

AEP needs to hike Ohio rates 45% over 3 years
COLUMBUS, Ohio – American Electric Power said Thursday it must raise electricity rates 45 percent for its nearly 1.5 million customers in Ohio over the next three years, to cover soaring coal prices and the cost of modernizing its systems to keep them reliable.

That 18 percent rate hike Dominion just got approved? You ain’t seen nothin’ yet.

From EnergyCentral in Kentucky, we hear similar news:

On Wednesday, TVA Chief Executive Officer and President Tom Kilgore said that rising production costs will drive up the price it charges local distributors for that power. TVA is allowed to make such fuel cost adjustments quarterly, and this one could increase individual bills by 10 percent to 20 percent, Kilgore said. A 15 percent boost would be TVA’s biggest rate jump since 1977.

That means an extra $12 to $25 charge per month for the average household, he said. Local utilities expect to pass that increase directly on to their customers.

And with production declining, and renewable energy becoming more cost competitive, we may soon see states who hope to protect their consumers begin to invest in conservation, efficiency, and real renewable energy in a serious way.

1. This weeks featured blogs…
David Roberts expands on the topic of coal prices over at Grist

After gas prices, electricity bills are probably the most salient energy price indicator for average folk (albeit a distant second), so the current gas price hullabaloo offers a decent preview of what we can expect.

There will be outrage. There will be demands for increased mining. (Mine here! Mine now!) There will be Republican demagoguery on behalf of coal companies (and as a bonus, coal-state Democratic demagoguery too). There will be promises that coal mining and burning aren’t like they used to be, because these days super shiny technology makes them clean. There will be expert testimony saying that coal prices are rising because of structural economic forces that won’t be affected by an uptick in mining; that testimony will be disregarded by the demagogues. Greens and their legislative friends will push back with a scattered, incoherent message that involves half capitulation to mining and half boosterism of alternatives.

How will it all shake out?

Well, let’s wait and see how the gas-price thing goes. That will tell us a lot.

Climate Progress points out some of the dangers of continuing our current polices by looking at McCain’s pros and cons (their take is mostly cons on energy).

And at all the small things we learn about a Wendell Berry facebook group, which I fully endorse:

For those who enjoy the work of the farmer-poet, Wendell Berry, and/or agree that we are steadily losing a part of what makes us human in our rush to embrace technology and uber-industrialism. For those that retain agrarian values in the face of mass development and rampant consumerism.

2. MTR Fact of the Week
Mountaintop removal has a devastating impact on local economies in Appalachia. Communities around MTR have some of the highest poverty rates in the country, as well as population decline, and lower levels of education than other areas of their states and the United States. 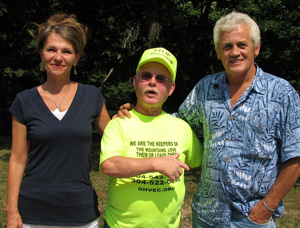 Donna, a retired nurse, and Charlie, a member of the United Mine Workers of America, have successfully organized with their neighbors to keep valley fills and strip mine permits away from their home in Lenore, West Virginia for the past ten years. They have worked with other Mingo County residents to form a new citizens group, West Virginia Future. With support from OVEC members across the state, the group launched an outreach media effort with two bill boards along highway 119, encouraging other residents to join together and protect their mountain heritage.

“We aim to ensure good paying green jobs through deep underground mining, reclamation, renewable energy, and sustainable industries. We recognize how hard our people have fought in the past for our rights and freedom and are working today to carry out that tradition.”

Right now the group is organizing against a mountaintop removal permit that will flatten five miles of Buffalo Mountain and fill in 14 streams. Donna, Charlie, and their neighbors are also beginning to plan for alternative jobs in the county. To learn more about the group and find out how you can help Donna, Charlie, and the Mingo County Group, call (304) 475-2529 or visit WestVirginiaFuture.org

(In the photo above, Donna and Charlie pose with Larry Gibson, founder of the Keeper of the Mountains Foundation).

This entry was posted on Monday, August 11th, 2008 at 2:29 pm and is filed under News. You can follow any responses to this entry through the RSS 2.0 feed. You can leave a response, or trackback from your own site.

3 Responses to “Mountain Monday: Your Wallet, Coal, and Electricity Prices”