Healthy critters in our streams are an important sign that the water is safe for all life. So it’s key that we keep an eye on the crawdads! 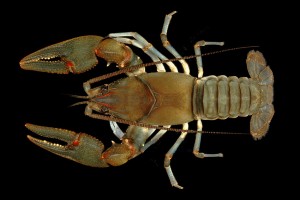 Our friends at Center for Biological Diversity have created a petition and lawsuit that forced the U.S. Fish and Wildlife Service to propose to protect two species of crayfish from Appalachia under the Endangered Species Act. The crayfishes have been lost from more than half of their ranges because of water pollution, primarily from coal mining. The Big Sandy crayfish is known only from the Big Sandy River basin in eastern Kentucky, southwestern Virginia and southern West Virginia; the Guyandotte River crayfish is known only from the Guyandotte River basin in southern West Virginia.

This listing proposal means that federal agencies will now have to confer with the U.S. Fish and Wildlife Service before funding or permitting any activity that could harm the animals. When the listing is finalized in 12 months, it will be illegal for any person or corporation, including coal companies, to harm the crayfishes or their habitat. The Service will propose critical habitat to protect the crayfishes in the near future.

This entry was posted on Thursday, May 14th, 2015 at 1:20 pm and is filed under Blogroll, News. You can follow any responses to this entry through the RSS 2.0 feed. You can skip to the end and leave a response. Pinging is currently not allowed.