by Ricki Draper and Dan Cohn

Hands Off Appalachia (HOA) is an urban-based campaign that targets the funding of mountaintop removal. A small handful of banks are responsible for the majority of the loans, bond underwriting, and other credit extended to companies like Patriot, Arch, Alpha, and James River Coal Company. The financial backing enables coal companies to continue devastating the mountains, especially through the recent tough coal markets.

For the past two years, we at HOA have been confronting UBS, a Swiss-owned wealth management company, who is one of the top funders of MTR companies. The campaign began in Knoxville, TN, and has focused on mobilizing cities in the south against MTR and applying enough public pressure that UBS is forced to stop funding mountaintop removal. Recently, HOA has been expanding our campaign into the northeast to bring more pressure to bear on corporate decision-makers at UBS’s North American Headquarters in Stamford, CT.

Following our Fall Action Camp in Connecticut last November, 14 people were arrested on November 25th during a day of powerful non-violent direct action demanding that UBS stop funding MTR. You can read more about those actions here! 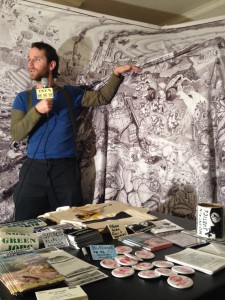 Sharing the stage at many speaking events, it was amazing to see how our work addressing the coal industry in Appalachia intersects with the various struggles for clean water and healthy communities throughout the country. We learned more about the fight against the Keystone XL Pipeline in DC; how students are organizing on their campuses at Swarthmore, Brandeis, and MIT around divestment as a tool for ending extreme energy extraction; how folks in New Haven are building resistance against the TransPacific Partnership; and we also learned about the struggle against hydrofracking in Maryland. While conditions grow more dire and disasters more frequent, it was heartening to hear about many forms of resistance to industry and corporate power.

Because our actions in November drew activists from as far away as West Virginia and Missouri, we want to make the most of every visit to UBS’s headquarters. When we go back to court for a pre-trial hearing on March 20th, we will hold another series of speaking events and benefits! Be on the lookout for another tour schedule soon. If you would like to bring us to your town, please email us at HandsOffAppalachia@gmail.com!

In the meantime, HOA is working hard to replenish the Mountain Justice Legal Defense Fund. It took a lot of money to bail 14 people out of jail in time for the holidays, and our bail money is still tied up in the Connecticut legal system. If you are able, please consider donating the MJ Legal Defense Fund online here in order to support people who put so much on the line to stop the crime of mountaintop removal.

This entry was posted on Thursday, February 13th, 2014 at 1:35 pm and is filed under News. You can follow any responses to this entry through the RSS 2.0 feed. You can skip to the end and leave a response. Pinging is currently not allowed.