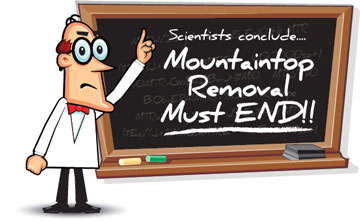 No More Excuses!  It's Time to End Mountaintop Removal.

On January 7th, 2010, a dozen prominent scientists published a blockbuster study in the journal Science that confirms what coalfield residents have been saying for years: mountaintop removal's impacts are "pervasive and irreversible," "attempts to regulate [mountaintop removal] practices are inadequate," and that "regulators should no longer ignore rigorous science."

It came just days after the EPA approved the expansion of the largest mountaintop removal mine in West Virginia, a decision that clearly contradicts President Obama's promises to give a science a more prominent role in his Administration.

But, according to these top scientists, the inconvient truth is that there is NO scientific justification to continue mountaintop removal coal mining.